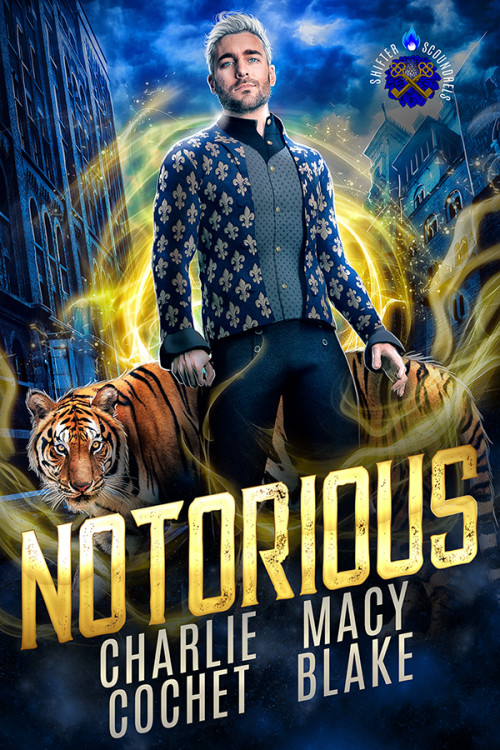 If you can’t be good, be notorious.

New Paranormal Romance from Bestselling MM Authors Charlie Cochet and Macy Blake. Modern-day Bridgerton with shifter royalty, a snarky fox, and the tiger who refuses to fall for his charms.

Caspian Drake knows what it takes to get ahead in modern-day shifter society. He is an Earl, after all, and known for his wit, style, and ability to charm the pants off of anyone he chooses. Getting his best friend Brandr, the Prince of the Dragons, in and out of trouble is only one of his many talents. When a horrible attack shakes Cas’s world, he’s forced to pair up with Saphir Vepkhia, the esteemed tiger shifter and former Captain of the Royal Guard.

Upon retirement, Saphir is granted the title of Baron Archer and, much to his dismay, becomes part of royal society. Years later, when he’s summoned to the palace, the last thing Saphir expects is for the king to request a favor that ties him to the scoundrel, Caspian Drake. Despite his misgivings, Saphir accepts the assignment, knowing it will give him the access he needs to infiltrate the wealthy and powerful while trying not to get outfoxed by the exasperating Earl.

Forced into a fake relationship by an outdated matchmaking ritual, Cas and Saphir each face the upcoming season with their own agenda. The secrets pile up as the two mates navigate the complexities of a modern world that plays by historic rules. But the closer they get to the truth, the greater the danger–and their attraction to each other–grows.

With their lives on the line and the very foundations of their society at risk, Cas and Saphir must unravel the mystery, even if it means creating a scandal more notorious than their newfound love.