I'm so excited and honored to once again be a part of this amazing anthology. Volume 4 is a paranormal anthology and brings together a host of amazing authors! Don't miss out on these awesome stories. Plus, royalties go to three wonderful LGBTQ charities!

Available on Amazon and Kindle Unlimited. 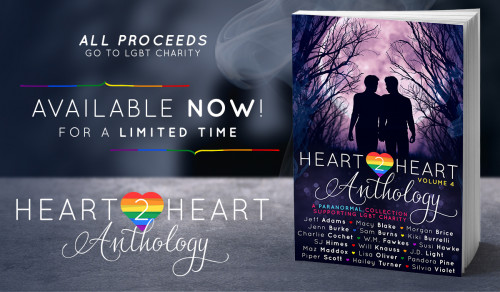 Once upon a time, a bunch of authors wondered... Why should Heart2Heart - the phenomenally successful dating app - only work its magic in the human world when lonely lycans, dejected dragons, and jilted jackalopes need love, too? In this new paranormal universe, mages and shifters, vampires, psychics, and even humans, will reach out to Heart2Heart podcast host Gene E. Del’Amp for help finding a magical match… and they just might find that talking about their woes helps their wishes come true. Eighteen of your favorite gay romance authors have come together to bring you brand-new paranormal and urban fantasy stories inspired by reader suggestions! Once again, all proceeds from this collection will go to the authors’ favorite LGBTQ charities, to ensure that love in all its forms will be celebrated and protected every single day of the year!

Hello, all! I'm super excited to announce the release of Heart2Heart, a charity anthology benefiting LGBTQ charities: The Trevor Project, Bisexual Resource Center, and one-n-ten. I'm honored to be a part of this amazing group of authors. A huge thank you to everyone who worked hard to put this anthology together.

Once upon a time, a bunch of authors wondered… What if a dating app that guaranteed you a love match broke down just in time for Valentine’s Day? What if you found yourself on a blind date with a random guy who might be your opposite in every single way? It could be a disaster. Or… When the code breaks down, fate just might take over.

Eleven of your favorite authors of gay romance have joined forces to light up your Valentine’s Day with a collection of sweet, sexy, silly, and hot short stories, featuring a wacky cast of characters chosen from your reader suggestions! Morticians and magicians, superheroes and spies, lawyers and lobstermen, will all learn that love has nothing to do with algorithms… and sometimes you find it in the least-likely places.

And the best part? All proceeds from this collection will go to the authors’ favorite LGBTQ charities, to ensure that love in all its incarnations will be celebrated and protected every single day of the year!

** Please note that it might take Amazon a little longer to make the book available in some territories. Thank you!

Hello all! I'm proud to be one of the many folks joining in the LGBTQ Push Back Charity Giveaway. What is this event? It's a way for us to give a little something back to the charities that give so much. I'm sure many of you have heard the story about the pizza parlor that received a million dollars in donations through GoFundMe for refusing to cater an LGBT wedding. Obviously, the pizza isn't what this is about, and although the refusal to serve LGBT people in the name of religious belief is truly upsetting to me, but I think what I find most upsetting is the fact these people received a million dollars in support. There is so much wrong happening in our world, in our country, hunger, death, despair, abuse, violence, suicides, that this to me is the worse kind of blow. These people are prepared to throw all this money at a pizza parlor in support of their beliefs when they could be supporting those who truly need help. How much food could that millions dollars have bought? How many beds? How many winter coats, shoes, blankets? I could go on and on, but instead, I want to spread the massage of love and joining in to support folks who actually care about helping others.

Authors, review bloggers, and publishers have come together to offer their support. Instead of spending $5 on a book in the next two weeks, give that $5 to an LGBT charity of your choice, tell Diverse Reader about it in their comments, and go into the draw to win a book from one of the participating donors. If you can’t make a donation then please take a moment to share a charity’s links and tell us about the charity instead.

Three fundraisers have been set up to counter the effects of Indiana’s SB 101. #Pizza4Equality is aiming to match the money raised by the pizza parlor, with all donations going to Cyndi Lauper’s True Colors Fund. Another fundraiser is aiming to raise $100,000 for Indiana Youth Group. Planting Peace hopes to raise $100,000 to provide beds for homeless LGBT people.

I've made my donation to the True Colors Fund and am providing an eBook to Diverse Reader for the giveaway. Together we can prove that love conquers hate. Check out the amazing post at Diverse Reader here: http://diversereader.blogspot.com/2015/04/lgbtq-push-back-charity-giveaway.html