When Love Walked In
A Valentine's Day Sip 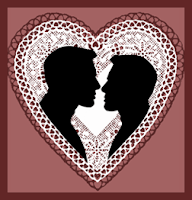 Bruce Shannon is a Private Investigator dealing with case after case of missing persons and infidelity. None of which inspire warm, fuzzy feelings during the week of Valentine’s Day. Then again, Bruce isn’t exactly a fuzzy feelings kind of guy, which suits him just fine. He doesn’t need anyone anyhow, only his cat, Mittens. That is, until the handsome Jace Scarret wanders off the street and into Bruce’s life. Will Jace end up showing Bruce that maybe Valentine’s Day isn’t so lousy after all?


Sneak Peak:
Unaware of Bruce's ogling--thank goodness, Jace set a plate of toast on the table.

"I hope you don't mind, but I thought I could thank you by making you breakfast. I didn't know what you liked, so I made a little bit of everything."

"You made all this?" Bruce asked, dumbfounded. He was pretty sure all he'd had in his refrigerator were a few eggs, a meager block of cheese, and a few strips of bacon.

Jace poured them each a cup of coffee and joined him at the table. The first bite was enough to make Bruce melt. My god, the man could cook, unlike Bruce who had nearly burnt the place down once attempting to boil an egg.

"Where have you been all my life?" he moaned, enjoying another forkful. He glanced up and nearly choked on his eggs. Whatever reaction he'd expected, it sure wasn't the one he received. Jace was staring down at his plate, his cheeks a bright pink. It occurred to Bruce that there was something he'd like for breakfast far better than eggs. To make matters worse, when Jace met his gaze, it was all too clear the guy was happy to be that something. That couldn't happen. The poor fellow had enough problems without adding the complications of a tumble in the sack. Besides, the last thing he wanted was for Jace to think Bruce expected something from him after all.

Clearing his throat, Bruce turned his attention back to his breakfast. "This is really good. Thanks."

"Oh, uh, sure." There was a hint of disappointment in Jace's voice, but Bruce figured it was for the best. Definitely. Probably...


Join me February 1st for chats and vintage fun at the Torquere Press blog: Romance For the Rest of Us