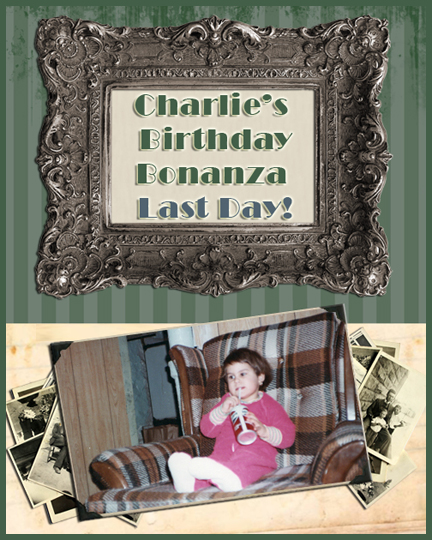 Welcome to Day 3 of my little birthday celebration!
Today is the last day to enter the contest. Thank you so much to everyone who dropped by over the last three days. You all have been amazing, and have truly rocked this virtual party!

(That up there is me in my favorite feety pajamas which my mom said I would scream my head off if I didn't get to wear them to bed. I also loved Pepsi. And no, that Pepsi isn't king-sized, I was just small for my age.)
♥♥♥


Since it's the last day, I thought I'd share some old pictures of me, so brace yourself. I grew up in the 80s, and when I look back, it's astonishing I came out of it in one piece. 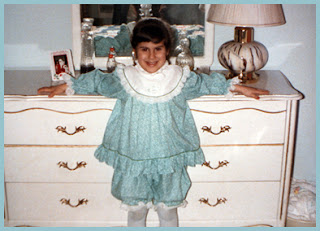 Yes, that's me 6yrs old, dressed as a Cabbage Patch kid. It was for a school play. For the life of me I can't remember what the play was about. That's when those dolls were so damn popular schools were making plays about them! And it was a Catholic school. Yep, I was in Catholic School for all of three years. For some reason, it scared the hell out of me. Especially when the nuns would take us on a 'field trip' to their house across the street from the school. I don't know what it was, maybe my inner rebel, but I remember just standing in one spot for the duration of the visit trying not to freak out. I didn't like being in there, and a good deal of the time I wanted to cry. My dad put me in public school promptly after. 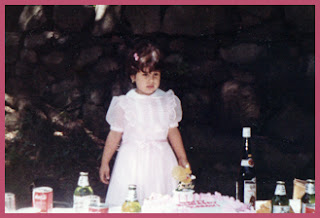 I think I'm about 5yrs old here, and I have no idea what it is that has me so transfixed. Perhaps it might be that ginormous bottle of alcohol standing dangerously close to my birthday cake. This is obviously before my brother was born and we had to share parties. Loving all the beer on the table mixed in with the cans of Coke. My mom was also obsessed with frilly dresses. I had dozens. It might be why I developed an aversion to dresses, because I was ALWAYS forced to wear one! 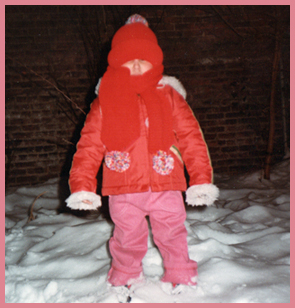 Oh my god, I've always LOVED this picture! It just sends me into a fit of laughter every time I see it. It wasn't like I was in some expansive park. This was our backyard. My mom dressed me like the abominable snow child to go in the back yard. I'm amazed she didn't put up the fuzzy hood, too. And where are my feet?! 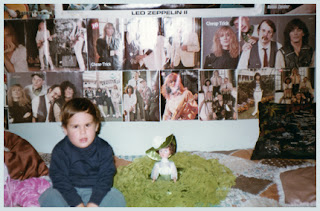 So until I was about three years old, my mom had a habit of dressing me like a boy. Could explain while to this day I go through phases. Some days I feel girly and dress as such, and some days nothing but converse, jeans, and a t-shirt will do. When I was a kid I had days where I wanted to do nothing but play with Barbie and my ponies, and other days where I wanted to ride my bike, rough house, and play with the rest of the boys on the block. And no, that's not my bedroom. I wasn't born a little rocker. My cousin was a teen at the time and obviously a Led Zeppelin and Cheap Trick fan, both of which I very much enjoy listening to. Hm... 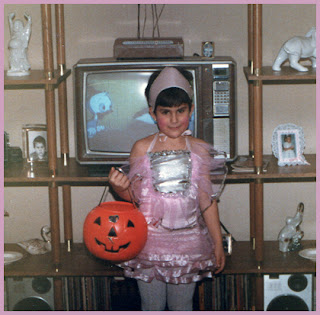 This is during one Halloween, which was always the best when I was a kid. Folks really got into the spirit of it. My mom usually made me my costumes. This one was bought, and I don't know who picked it. I'm going to say I was a space princess because anything else would just be wrong. If it was my choice, my mom shouldn't have indulged me. Mom, if it was yours, what were you thinking? Look at the length of that skirt! Lace stockings, and blush?  Who makes that sort of thing for a 6 year old?! For those who think the skirt isn't too short, the bottom two ruffles are transparent. Yep. Nowadays, you couldn't get away with some of the stuff you got away with in the 80s.

I'd also like to point out that awesome TV behind me. The silver thing with the buttons on the right of it is the remote control which stuck on there magnetically! Don't get that nowadays do ya? And the box thing at the top, it's an antenna with a bunch of buttons with different frequencies. It also has wood paneling. HD TV eat your heart out!

Yes, I also had a perm. Even my bangs had a perm. I was in 8th grade. No, you will NEVER see that picture. EVER. They're locked in a vault to which I have forgotten the combination. Said vault is also at the bottom of the Atlantic. In other words, they shall never see the light of day! Muahaha. Unless you ask my mom, but then I'll have to hunt you down.

For a chance to win a prize, all you have to do is leave a comment on this or any of the birthday posts. Contest closes Saturday, August 18th at midnight (EST).
Via random.org, winners and their prizes will be chosen randomly and announced on Sunday, August 19th here on the blog. You will also be contacted by email to arrange delivery of your prize, so please make sure to leave an email address.
Prizes include eBooks and more! You can check out what's up for grabs here.
♥♥♥
What's the craziest thing you remember about the 80s?