Hello all! Welcome to the third part of my series on creating character. Here I'll talk a little about how I go about creating the man our hero will ultimately fall in love with. Here's the first part if you missed it: Creating Character Part 1: Who Am I? As well as how I go about naming said heroes: Creating Character Part 2: What's Your Name, Handsome?

As I mentioned in Part 1, the more I get to know my first hero, the more my second hero starts to materialize. When I got the inspiration to write The Amethyst Cat Caper, I knew I wanted to write a Classic Hollywood movie type story. I had my main hero: Remi, who would inadvertently end up with the amethyst cat-the object sought by our gentleman thief. I also knew my second hero would be a detective, and as I mentioned in Behind the Scenes: The Amethyst Cat Caper, Stanley Hawk started out as a police detective. We soon discovered that the position didn't really fit Hawk, so after a good deal of research, he officially became a Pinkerton Detective. 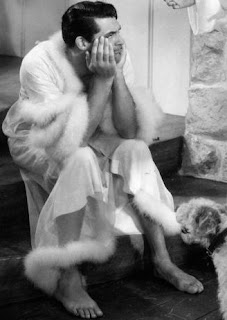 I had my starting point. Now I had to know what kind of man Hawk was, what kind of detective he was, and how he would feel about who Remi was. I knew that I didn't want Hawk to be like Bruce. To me, Bruce is more noirish. A tough talking, whiskey guzzling, always at the wrong place at the wrong time, gets-into-fist-fights-because-someone-insulted-his-mother type character. Hawk on the other hand, I see sharply dressed as a Cary Grant type character in romantic screwball comedy, with some mayhem added for the fun of it. Getting to know Hawk would help me figure out how he interacted with others, especially Remi.

Obviously, being a Pinkerton--who handled security for many businesses and high society folk, Hawk would have had to deal with plenty of wealthy folks. So I decided to make things a little tougher for him, by making him well-spoken (compared to a lot of the other detectives he works with), educated from the two years he spent at Harvard, and a fella who cares about his appearance, just to start off with. What does that mean? It means that when a job comes up that involves fancy folk, Hawk would be the first one his boss would call on. Much to Hawk's irritation. So, I now knew that he'd be forced to deal with high-society. It made sense that at some point he may have gotten involved with some well-to-do gentlemen. He is, after all, a handsome, cheeky fella, and I'm going to guess that a lot of those young fellas he got involved with were all very excited to be having a dangerous detective in their bed.

Of course, the reality is that Hawk doesn't walk around scowling and pulling guns on people, and he's only dangerous if someone is threatening his life. His job's not exciting either (not before he meets Remi, anyway), and consists of endless paperwork, sitting in his car doing stakeouts for hours on end, following people around, asking lots of questions, and the list goes on. The illusion wears off quickly, and soon these fellas see him for what he really is: just a regular working class Joe. Hawk's experiences with these fellas have him judging Remi before he's even met him, and although some of his assumptions prove to be wrong, there's still a lot of uncertainty and distrust. He thinks Remi's just out to have a little fun, so why the hell not go along for the ride.

I wanted someone who would also help Remi grow as a person, someone who could challenge him and bring him down to earth a little. Remi is used to doing things his way and not being questioned about it. He's been in love once and fooled around a few times, but he hasn't had a serious relationship, so sometimes he forgets what it's like to be part of an equal partnership.

The most important thing is that I put as much work into Hawk as I did Remi. Hawk is his own man, and none of his traits have anything to do with Remi. He has his own likes and dislikes, as well as his own strengths and weaknesses. I thought about Hawk's childhood, how he was brought up, by who, what happened in the war, the kind of man he is, what's brought him to this point in his life, and all those other questions I ask myself when developing any character, and although he compliments Remi, he has to be a fully developed character who is just as strong.

It does you no good to have a fantastic hero, and then the fella he falls for is about as appealing as stale popcorn. They have to bring out the best and worst of each other. Like real people in real relationships, each fella possesses traits that the other either loves or is driven bonkers over. They have to have had their own heartaches, dreams, and demons before ever meeting each other. They will learn to reign in certain parts of themselves, or try harder not to do certain things, but those traits have to have been there in the first place.

Example: Remi has a bit of a temper and is known to blow his top on occasion. This sort of behavior is something Hawk wouldn't tolerate from anyone. Were it not Remi, Hawk would either walk away or give that person a good piece of his mind and let the chips fall where they may. With Remi, he holds his tongue. Depending on the severity of the situation, he'll either talk Remi down with a few kisses, a little cuddling, and some saucy talk, or he will just stand silently to one side with such skill as to almost disappear into his environment. Once it's safe, he will engage the Englishman. Remi's tantrums will either amuse Hawk or frustrate the living bejesus out of him. Why? Because a part of him will always be aware of their differences--mainly their social standings. Just because they're in love, doesn't mean it's easy, and doesn't mean that certain facts can be ignored, but it does mean that each one will do his best to make things work. Of course they'll fight. Of course Hawk will end up sleeping on the couch, and yes, Hawk will give in more than Remi, even if something's not entirely his fault. Why? Not because he's weak, but because he's weighed the importance of that argument and whether it's worth the heartache. Because when we love someone, sometimes we do have to swallow our pride, and be the first to wave the white flag.

When I develop my second hero, I don't create him to merely compliment my main hero. He is his own man with all the various types of traits that make up any other fella. I will think about what I need from him, and how he's going to provide that through his own traits. I'll think about how him being who he is might make things difficult for their relationship. 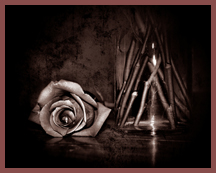 For Roses in the Devil's Garden, I wanted to sort of work backwards. I wanted an already established couple with a strong relationship who also work together, both Prohibition agents. I knew that with Harlan and Nathan, it wouldn't be about them finding love, but keeping it. Because although they've been together six years and would do anything for each other, it doesn't mean they don't have to fight to keep what they have. They're lucky to have each other and they know it, but they've had to fight tooth and nail for it. The Great War brought them together, and in a way, keeps them together, because they both suffer from PTSD, though in this book, Harley is unaware of the severity of Nate's nightmares, because Nate prefers to suffer in silence, rather than add to Harley's troubles, which in the end, won't be good for either of them. At times, their relationship is unhealthy, and they're aware of it, but what they provide for each other trumps everything else. Nate provides the humor and playfulness that Harley needs to feel like a regular guy. For Nate, Harley provides the safety and security he feels he can't survive without.

We're all drawn to different types of people, and area attracted to different types of traits. Whether it's a sense of humor, a love of the same things we love, or the ability to provide what we feel is missing in ourselves. Our fellas fall in love for a reason. What is it about this fella that has your MC all in a tizzy? Whatever it is, remember he's got to be just as developed as your main man.

Next week: Creating Character Part 4: Mirror Mirror, on the Wall. How I go about deciding my characters physical traits.

Hope you enjoyed this little session. Feel free to ask any questions. What do you feel works for you or doesn't? As a writer or a reader.