A very Merry Christmas and Happy Holiday Season to all!!
Here's wishing that everyone has a holiday filled with happiness and love. 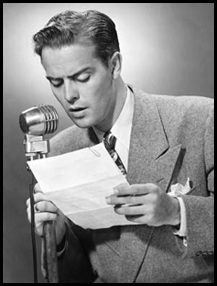 Well, it's official. My first story When Love Walked In is out today! Woot! I'm so excited and incredibly nervous. It's being sent out to lots of reviewers and I'm quaking in my... uh, converse!

Thus begins my journey into the world of the published author. Join me over at the Torquere Press blog where I'm chatting about my new release, the dirty 30s, detectives, and more!

Read more about When Love Walked In here.

Today I'm being interviewed over at Dawn's Reading Nook where I'm being asked all sorts of nifty questions about everything from bad boys and perfect gentlemen, to inspiration and my favorite authors. Here's a tiny taste:

Where do you dream of traveling to and why?

I love places that are rich with history, where you can still find evidence of times long gone. I also love places of tranquility. I’m big on that. I think because we can get so little of it these days. I also love the snow. Okay, so that’s like, three things. There isn’t one specific place I’ve always dreamed of going, but I think I’d like to stay in a log cabin in some snowy mountains somewhere. Where you can walk out your door with a cup of coffee and just stare off into an endless sea of white. Preferably with a handsome mountain man to make me hot chocolate and keep me from getting eaten by wolves.

Tell us about your favorite character from your books.

Ooh, that’s a tough one. From my three current stories, if I had to choose, I’d say Bruce Shannon. Shhh, don’t tell the other fellas! He’s wonderfully complex, but you would never know by looking at him. Tough, rugged, spends a good deal of time in his own head, grumpy, sarcastic,  and despite his views on humanity, always strives to do the right thing, even if the line between good and bad are a little blurred in his world.

Why not drop by Dawn's Reading Nook for the rest. You can ask your own questions or just say hello!

This is my muse, and yes, he is as much trouble as he appears to be. I know muses are meant to inspire, and in his own--at times infuriating--way, he does. I don't try to understand him, and it's best I not engage him head on, because he'll usually get his way. When he doesn't, he makes that mopey face in the hopes I'll cave in. I usually do.

Whenever I think I've got enough on my plate, he shakes his head, gives me that devastating smile, and softly urges me to take on something else. I love him yet want to strangle him with his own suspenders.  Maybe I need the tight deadlines, maybe I've just lost my marbles. Either way, it's never a dull moment!

What I'm working on this month (that I know of):

♥ Great interview and giveaway at Joyfully Jay this Friday, 9th of March.
♥ My day over at The Romance Reviews Anniversary Party Saturday, 17th of March. Head on over any time this month to win lots of great prizes! (You must be registered and logged in to enter). 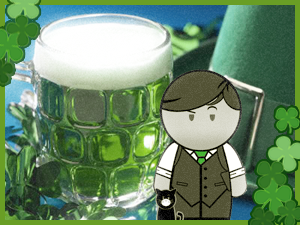 Today I'm over at the Torquere Press blog talking about family traditions, Irish coffee, and later on in the day, I'll be sharing an exclusive St. Patrick's Day ficlet brought to you by my handsome heroes from When Love Walked In -- Bruce and Jace!

Drop by for a chat or to just say hello!

In other news: my Love Is Always Write story has a title! Harley's man has also been chosen and named. And the story is underway! More to come on that soon, so stay tuned! 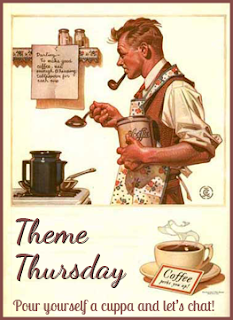 Hello all! Today's Thursday Theme is about a weakness of mine. No, not tall, handsome men in three-piece suits-- though that is certainly one of them. I'm talking about stationary!

It could be the writer in me, or it could just be the crazy, but I love stationary, especially journals and notebooks. Walking into an office supply shop or a Barnes & Noble is just as good as walking into a candy shop. With B&N, it's not about the books, it's about all their amazing journals. I tend to stay away because I know if I don't, I'll end up buying more than I should.

Thing is, I never know what to do with them once I buy them. I know what some of you are thinking. Well, that's easy, you're a writer, you write in them. I can't! I'm a very messy writer you see, especially when it comes to hashing things out for a story. I have plenty of spiral and composition notebooks for that. 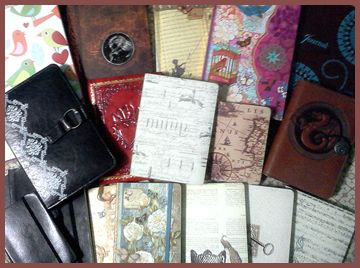 I have used a few to keep research in, because that information doesn't change, just gets added to. I'm also fussy about which pen I use to write in which book, because you know, uh, they all have different textured paper, and um... Too much information?

Anyway, the notebook below is the one I used for The Amethyst Cat Caper. That's my writing on a very good day. When I get stumped, or I'm thinking, I start doodling. I was one of those kids in school whose notes was full of flowers and doodles all up the sides and bottom. No blank space was safe from me. Still isn't. The doodle in the middle is my plotting out the location of furniture in Remi's study. If Hawk's going to get punched in the jaw and tumble over the couch, I need to know what else he might run into along the way. Poor Hawk. 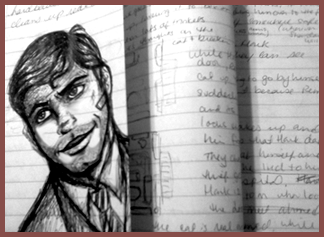 Of course, back in the day before computers, I used to write all my stories in journals. In fact, I had a novel that filled four of them from cover to cover. I was much younger then, and had a lot more patience. Plus, it was either that or the typewriter, and I hated the keys on that thing. My fingers were small and short, and the keys were ridiculously far apart. I also had to really jab down for it to even budge. I have no idea where it came from. I kind of wish my mom had kept it though, because it was one of those portable 50s pastel blue typewriters where the lid fit over it. Well, portable by 1950s standards. 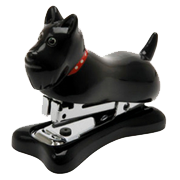 I also have plenty of sketchbooks and end up sketching in notebooks and printer paper. *sigh* I don't know either. So, is there something you like to collect? Something that you simply can't get yourself to walk away from? Tea cups? Thimbles? Miniature bears? I vaguely remember it being a thing, collecting tiny glass, transparent animals. Hm, whatever happened to that?

... and how Hollywood continues to feed my suit fetish. It's no secret that I love a man in a suit. Especially a three piece suit. Add a hat, and well... *sigh*

There's just something incredibly sexy, sophisticated, and just plain ROAWR! And let's face it, Hollywood does wonders in providing one with those little pleasures. When I'm not writing, I looove watching movies. Like books, they come in all flavors. Some are deep and gripping, some are just plain fun. I've got plenty of classic on DVDs, and then I've got some that are major cheese, but as they say, variety is the spice of life!

As with everything else Historical, movies can be hit or miss, but I try to find something enjoyable in each one, whether it's the costumes, the cinematography, the story, the actors-- I'm always happy to give the film a go.Here are some movies set around the 30s/40s/50s. 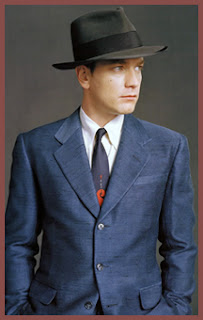 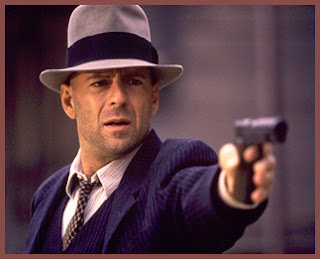 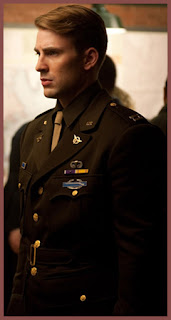 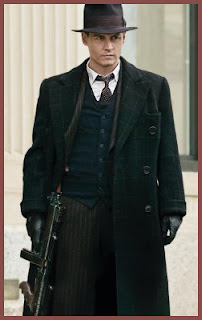 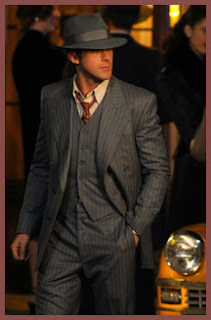 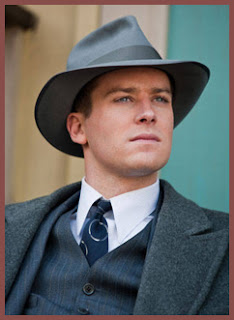 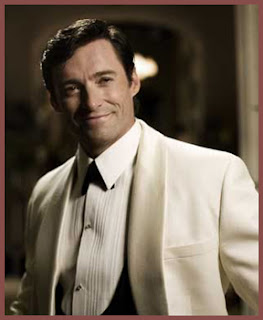 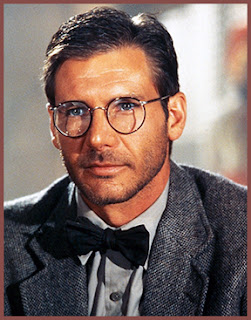 There are loads more, these are from some of the films I own on DVD. Except for The Gangster Squad. (That's out in cinemas some time later this year.) These films may not be to everyone's taste, but personally, I really enjoyed them.

Big Fish was wonderfully fantastical, the colors were beautiful, and it made me cry.  It's been a while since I've seen it and it's probably about time for me to watch it again. I love films that have that magical feel to them, and Big Fish is just beautiful.

Last Man Standing, gun for hire in Jericho during the Prohibition Era. Expect questionable morals, shootouts, sex, and Bruce looking his most broody.

Captain America, I have a weakness for comic book films, even some of the not so great ones (Constantine) though I do have to draw the line somewhere (Daredevil, Elektra, Jonah Hex). Green Lantern wasn't anything to write home about, but Ryan Reynolds is another weakness of mine. I watched Blade Trinity for him. Only for you, Ryan! Anyway, Captain America was loads of fun and hit all the right buttons.

Public Enemies, somewhat glamorized movie about John Dillinger but still enjoyable. However, I found the book Public Enemies: America's Greatest Crime Wave and Birth of the FBI 1933-34 to be far more fascinating. They slapped Johnny Depp on the cover of the book as they tend to do, but actually the book isn't just about John Dillinger. It covers several other notorious figures, such as Machine Gun Kelly, The Barker Gang, Bonnie & Clyde, Baby Face Nelson, & Pretty Boy Floyd.

J. Edgar, I've actually got the DVD but have yet had a chance to watch it. My movie to be watched list is as big as my book to be read list. I'm particularly interested in seeing how Hoover's relationship to Clyde Tolson--Hoover's assistant director-- is handled. For those of you who may not know, it's said that Hoover and Clyde shared a romance. According to the book The Bureau: The Secret History of the FBI by Ronald Kessler, "The two were inseparable. They ate lunch together almost every day and dinner almost every night. They vacationed together, staying in adjoining rooms, and they took adoring photos of each other." I'm planning to do a post on Hoover and Clyde sometime next week. That up there is Armie Hammer, who plays Clyde Tolson.

Australia, it was like watching a romance novel, one of those old school ones. Loved it. It was rather long, and being a Baz Lurhmann film, heavy on the special effects, but I enjoyed it, and not just because of the scene where Hugh is half naked, pouring water over his rippling pectorals. Though it did make me giggle like a school girl. It also made me teary on more than one occasion. Expect lots of drama, tears, defiant chin lifting, banter, and pretty, shiny things.

Indiana Jones and the Raiders of the Lost Ark, well what is there to say about a hunky, young Harrison Ford yielding a whip and getting his clothes torn left, right, and center. He's arrogant, fearless (except for the snakes) and the ultimate adventure hero. Raiders and the Temple of Doom I can watch over and over, and never get tired of them. Last Crusade wasn't the best, but still enjoyable. Crystal Skull, well, up until the great reveal, it was fun.

So what kind of films do you enjoy? Comedy, Drama, Sci-Fi, Westerns, Musicals, Bio pics? Do you have a guilty filmy secret on your shelf?