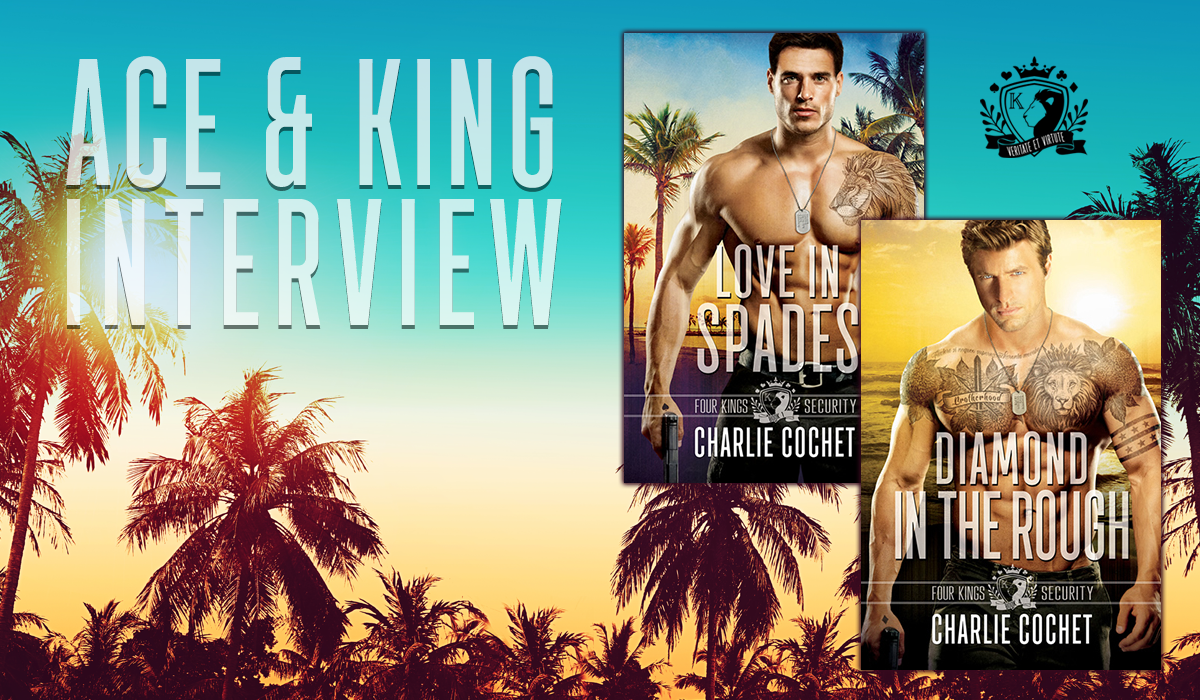 Charlie: Hello, all! Thank you for joining us today! In my Facebook Reader group, I asked readers to submit questions they’d like to ask King and/or Ace. We have the guys here today to answer some of those questions. Let’s get started, shall we? *waves at Ace and King* Hi, guys! Thanks for indulging us.

Ace: Are you kidding? Like I would miss the opportunity to watch King squirm.

King: *looks unimpressed* I don’t squirm. When have I ever squirmed?

Ace: *a wide smile spreads across his face* How about last week when I walked into your office and Leo was on your lap—

King: *covers Ace’s mouth* It’s not what it sounds like. *narrows his eyes at Ace* Also, what have I told you about closed doors?

Ace: *moves King’s hand away* Hey, I knocked. It’s not my fault you couldn’t hear me over the sound of your boyfriend’s—

King: Voice. His voice. He was talking to me.

Ace: Is that what we’re calling it?

King: *arches an eyebrow* Can we get on with it?

Charlie: *tries not to laugh* Sure. First question is from Shannon for Ace. What’s the one devious thing you’ve done to King that he hasn’t figured out you did, or you got him to blame Lucky?

Ace: *blinks innocently* I don’t know what you’re talking about. I have never done anything devious to King.

King: He thinks he gets away with things, but he doesn’t. I always find out. Most of the time it backfires on him.

Ace: *snorts* Please. I’m a master of subtlety. When has any of my pranks backfired?

King: Last Thursday morning. You taped that aerosol air horn to the wall in my office so when I opened the door the handle hit the horn and it went off. Why don’t you tell them what happened next?

Ace: *pouts* It scared Jay so bad he threw his phone at my head.

Charlie: *cringes* Ouch. That had to hurt. Cell phones can be dangerous.

King: *snickers* Oh, Jay didn’t throw his cell phone at Ace. He threw his desk phone. First the base hit him then the corded phone. Actually, knocked him off his feet. You can’t see the bruise because his hair’s covering it up. Not only did his little prank backfire, but now he has to grovel to Jay until Jay decides to forgive him.

Ace: *eyes wide* You don’t want to get on Jay’s bad side. Believe me. He’s all cute and adorable, but he will bust your shit up and make life at the office miserable for you. He’s like the gate keeper, so anything you need will be denied until he deems your ass worthy again. He has a sweet tooth, so I’ve been bringing him baked goods every day since, but I’m still in the dog house.

King: *smiles brightly* If you’ve done something to piss off Jay then you deserve whatever he dishes out.

Ace: *rubs the back of his head* Next question.

Charlie: This one’s for King from Kelly. Have you watched all the Marvel movies with Leo yet? Which one is your favorite?

King: I’ve watched them all several times now. Personally, I enjoy the TV shows more than the movies. I enjoyed several aspects from the Punisher as well as Dare Devil. For the movies, I enjoy watching Leo’s favorites because he gets so enraptured, no matter how many times he’s seen them. He tells me all sorts of interesting facts about the characters and the movie storylines versus the comics.

Charlie: And how much of a bad influence do you think Ace will be on Leo? That question is from Jenn.

*Charlie and King exchange glances before bursting into laughter*

King: *wipes a tear from his eye* That was a good one.

Ace: *narrows his eyes at King* Your man escaped CIA surveillance using a handball, you think he’s not going to Houdini his way out of trouble again?

King: *shrugs* He might, but if he needs me, he knows I’m right here for him. And no, I don’t worry about Ace being a bad influence on Leo. The two might get up to their shenanigans, but Leo isn’t easily swayed. If he doesn’t see the logic in something, nothing is going to change his mind on the matter.

Charlie: This question is for both of you and it’s from Kira Nieves. What did you first think of each other when you first met?

Ace: *snickers* When I first met King I thought, well this guy’s a barrel of laughs. *points to King’s face* There. That face right there. That’s the exact same face he was making when we met. The how have you survived this long face. I knew right away we were going to be best friends.

King: Meanwhile, I knew right away that he was going to be the cause of my having high blood pressure by the time I turned thirty.

King: I believed I could withstand most forms of torture. I was wrong.

Ace: What he’s trying to say in his own King way is that he loves me.

Ace: That’s his happy sound. He’s happy a lot. Like, all the time.

Charlie: *snickers* Okay. This question is for King from Emma Louise Burbidge. What went through your mind when you first realized it was Leo standing next to you with those goldfish snacks? Did you love him the moment you laid eyes on him?

King: My first thought wasn’t a thought. When I laid eyes on him my mind went blank for a moment. Then I thought he was cute. When I realized it was Leo, I knew I was screwed. I kept telling myself it would be fine and whatever strange reaction I was having to him would sort itself out. There was a lot going on around us at the time and I was trying to focus on what the hell was going on around us. I’d never been in that position before. I’ve never doubted or second guessed myself or my actions. I made a decision and followed through. With Leo, it was different. Everything was different.

Ace: *snickers* It was so stinking cute I couldn’t stand it. Most entertaining months of my life.

King: I’m glad I amuse you.

Ace: You always amuse me. *pokes King’s cheek* If Grumpy Cat were a person, he’d look like you.

King: You know what amuses me?

Ace: My playful and adorable antics?

Ace: *peers at him and slowly moves his fingers toward King’s cheek.

Charlie: Um, Ace, I have a question for you from Dani Fujikawa. What was your take on Leo and King's relationship? When you envisioned King dating, did you ever picture a Leo-type person?

Ace: *perks up and hand falls away*

Ace: It was clear there was something between them. I could tell the moment the two were in the same room together. Of course, I wasn’t expecting King to admit it. I mean, this is King we’re talking about. The more time I spent around them, the more obvious it was. I mean, King was always touching him.

King: *sniffs* Not all the time. Don’t exaggerate.

Ace: *grins smugly* And he did this all the time. This whole evasive thing. Like we haven’t known him for freaking ever. Also, I never envisioned King dating. *shutters*

King: What the hell was that?

Ace: Hence the shutter and why I don’t envision you dating.

King: *crosses his arms over his chest* What was wrong with them?

Ace: They were horrible! Remember that one guy who joined us for beers on that Friday night and spent two hours lecturing me and Lucky on why we shouldn’t eat meat? We’re Cuban, King. Ninety percent of our meals center around pork. He kept saying the ghosts of the little pigs were going to haunt us for the rest of our lives and then started oinking! Oinking, King. The guy had no idea how close he was to getting shanked with a buffalo chicken wing. Two hours. Two hours of my life I will never get back! *puts a hand to his heart* I think I’m having palpitations.

King: *tries not to smile* And a pastelito.

Ace: *jumps out of his seat* It was really nice talking to you, but we gotta go.

Ace: You got it. *takes off like the wind*

King: Thank you for having us. Now if you’ll excuse me, I need to catch up to him before he-- *horn honks repeatedly. King smiles and shakes his head*

Charlie: Admit it. You wouldn’t want him any other way.

King: *puts a finger to his lips before walking away*

A big thank you to everyone who submitted questions. We still have plenty more left, so I'll save those for the next time I corner the guys. I hope you enjoyed this interview with Ace and King! Let's see who else we can convince to sit down with us for a while. Until next time!