I'm super excited to announce the upcoming release of Notorious, the first book in the Shifter Scoundrels series co-written with Macy Blake. We had so much fun writing this book. It's unlike anything we've written before, yet has all the elements our readers love from our books. There's action, adventure, magic, shifters, sexy times, humor, and more! We can't wait to introduce you to this modern shifter world with a royal twist. 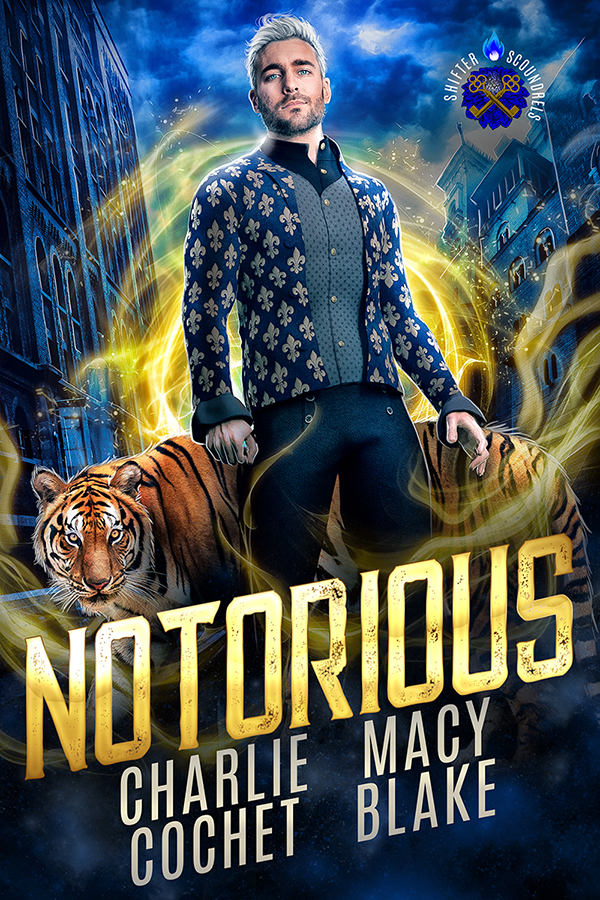 If you can't be good, be Notorious.

Caspian Drake knows what it takes to get ahead in modern-day shifter society. He is an Earl, after all, and known for his wit, style, and ability to charm the pants off of anyone he chooses. Getting his best friend Brandr, the Prince of the Dragons, in and out of trouble is only one of his many talents. When a horrible attack shakes Cas’s world, he’s forced to pair up with Saphir Vepkhia, the esteemed tiger shifter and former Captain of the Royal Guard.

Upon retirement, Saphir is granted the title of Baron Archer and, much to his dismay, becomes part of royal society. Years later, when he’s summoned to the palace, the last thing Saphir expects is for the king to request a favor that ties him to the scoundrel, Caspian Drake. Despite his misgivings, Saphir accepts the assignment, knowing it will give him the access he needs to infiltrate the wealthy and powerful while trying not to get outfoxed by the exasperating Earl.

Forced into a fake relationship by an outdated matchmaking ritual, Cas and Saphir each face the upcoming season with their own agenda. The secrets pile up as the two mates navigate the complexities of a modern world that plays by historic rules. But the closer they get to the truth, the greater the danger– and their attraction to each other– grows.

With their lives on the line and the very foundations of their society at risk, Cas and Saphir must unravel the mystery, even if it means creating a scandal more notorious than their newfound love. 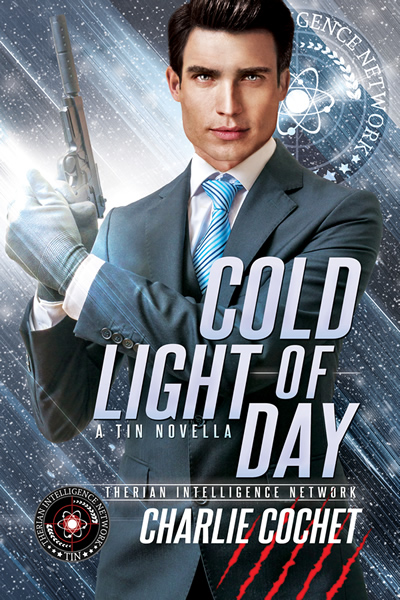 Hello and Happy New Year! I'm super excited to be taking part in a year-long giveaway hosted by Prolific Works: Your Book Boyfriend's Boyfriend. For the whole of 2022, 100+ MM authors are offering stories for free! Included is Cold Light of Day, my TIN Wolf prequel. You do not have to have read Gone But Not Forgotten (TIN, Book 1) to enjoy this story, but it will enhance your reading experience if you have as this story is technically #1.5 in the TIN series. It will also be available for free exclusively from Prolific Works for the whole of 2022. In 2023 it will be released on Amazon and KU.

Check out all the amazing stories in the YBBB Giveaway here: https://claims.prolificworks.com/gg/7LYjiwmIOM2sEtFtxtgs

Hello, all! We have quite a bit going on this month. On the 8th of this month, both Paranormal Princes audiobooks released. Greg once again did an amazing job. Stacking the Deck is also $0.99 as part of Amazon's Kindle Deal until December 31st. Since Amazon chooses which of its stores it will discount, and it's chosen US and Canada, I'll be discounting Stacking the Deck in January for a limited time for those outside the US and Canada, so no one misses out on the deal. (I can't change the price while it's in Amazon's deal, and have to wait until it's full price again).

Raising the Ante (The Kings: Wild Cards, Book 2) will be FREE for a limited time as part of the amazing Winter Wonderland Story Giveaway featuring over 200 fabulous gay romance authors. On January 11th, Raising the Ante will be available for sale on Amazon for $2.99. It will also be available on KindleUnlimited. The story is a novella, and just over 23k. Want to be notified when the giveaway goes live? Make sure you're signed up to my newsletter: https://newsletter.charliecochet.com/ 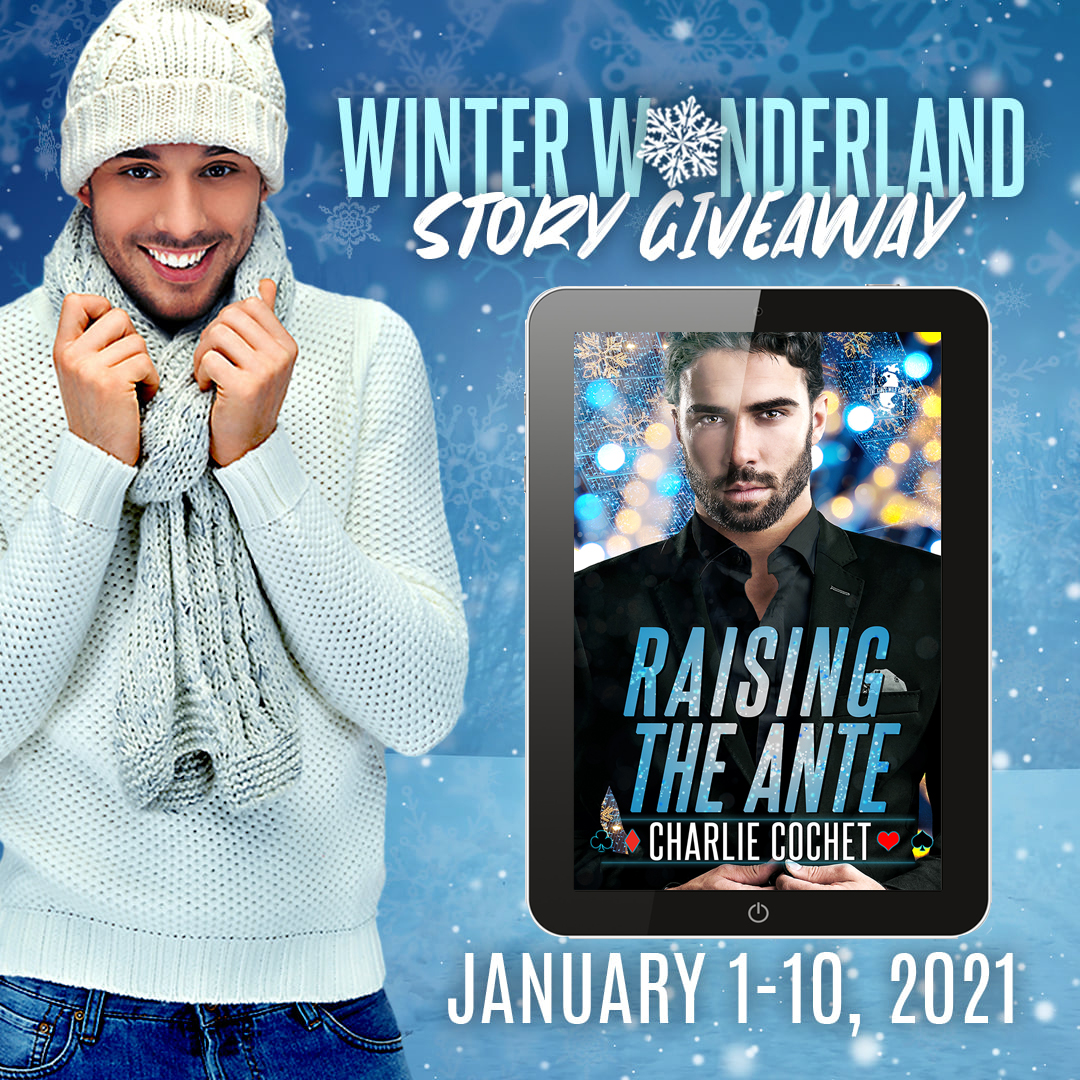 The Prince and His Captivating Carpenter (Paranormal Princes, Book 2) Audio

The Kings and His Vigilant Valet (Paranormal Princes, Book 3) Audio

On December 15th, there will be another announcement here on my website with more information on the Winter Wonderland Story Giveaway, so stay tuned. Or make sure to sign up for my newsletter and receive all the latest updates in your inbox. https://newsletter.charliecochet.com/

Jean and Alarick's story is finally here!! Join the shenanigans as the King of All Shifters and his mysterious valet embark on a perilous quest to save Alarick!

The past has a way of catching up with you, even if you are immortal. I’ve spent thousands of years as the valet and companion to the powerful King of All Shifters. It has been my honor and duty to protect, serve, and advise him. I never intended to fall in love with him. My past is filled with death and bloodshed, but I never once regretted keeping Alarick safe. Now an evil I thought long gone has resurfaced, determined to kill Alarick and plunge the world into chaos. Saving Alarick means revealing the truth about myself. I don’t know what’s worse, failing to protect the king I love, or watching him turn away from me in disgust when he discovers what I really am.

As King of All Shifters, my powers are connected to the cosmos, and I have been around since the dawn of time. There are few things that can kill me. Unfortunately, one of those things has escaped its prison and is set to destroy me. The only weapon that can defeat this creature is the Scythe of Kronos, which has been missing for nearly as long as I have lived. When Jean and I set out on a quest to find the scythe, questions I had long ignored must now be answered. What is Jean’s connection to this evil? Why will he trust me with his life but not his secrets? As my most trusted valet, and my greatest friend, surely nothing that happens along this perilous journey can change what I feel in my heart for him. Or can it?

Haven't read the series yet? Pick it up on Amazon or read it in KindleUnlimited.

Hello, all! I'm super excited to announce that The Prince and His Captivating Carpenter is now available on Amazon and KindleUnlimited! This is the second book in the Paranormal Princes series and introduces our grumpy bear shifter prince, Bernd, and the enchanting coyote shifter out to steal his heart, Saer.

As Prince of the Bear Shifters, I knew the time would come for me to prove myself worthy of my crown. I expected my quest to be perilous. What I didn’t expect was for it to take me up into Espen Mountain, a place that’s brought me nothing but grief and terrible nightmares. Not only must I find the five magical ingredients, but I have to do so alongside Saer, a mysterious and charming shifter coyote summoned by the king to be my guide. But who is Saer, and why do I feel as if we’ve met before?

Crushing on Prince Bernd from afar was one thing. Being given the responsibility of saving the prince and his kingdom was a whole other story. Banished from my kingdom by my own prince years ago, I never imagined I would be summoned to help Bernd. What could I possibly offer a prince? How was I supposed to save him? I was no one. A shifter with no place to call home. What I did know was that I would do everything in my power to help Bernd succeed on his quest. All I had to do was stop crushing on the guy, find the magical ingredients hidden up a dangerous mountain, and save his heart. What could go wrong?

If you missed my story in the last Heart2Heart anthology, it's now available for free download exclusively on Prolific Works. 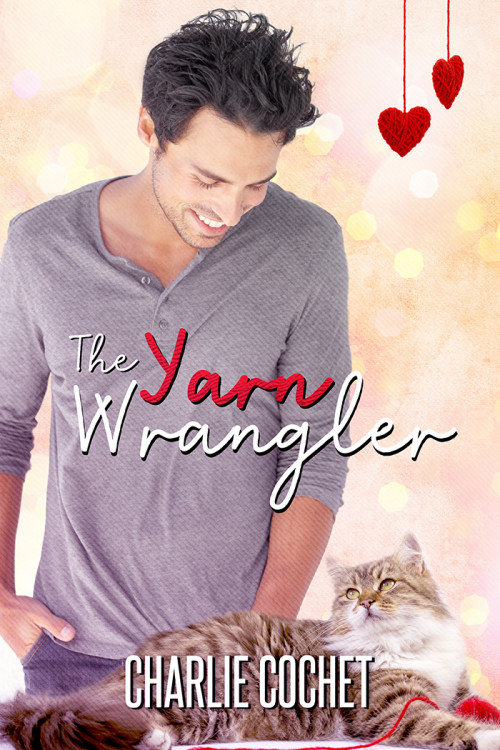 When Simon answers a Help Wanted ad for a yarn wrangler, he has no idea what that entails, or what he's getting himself into. Thanks to his soon-to-be ex-boyfriend, Simon needs the money. He takes the job, not expecting to be swept off his feet--literally--by Liam and his diva cat. The yarn hits the fan in this sweet short story.

* Please be aware that this story was originally published in the Heart2Heart Charity Anthology, Vol 3. under the same name. No new content has been added.

Hello, all! I've had several readers asking me where they can find a re-release schedule. I've put one together (which can also be found in the Files section of my Facebook reader group). Not all my books in my backlist are on here as I'm still figuring out when to re-release those. This is the schedule so far. You can find new release schedules on the Coming Soon page of my website.

RE-RELEASES TO BE CONFIRMED

Love in Retrograde
Between the Devil and the Pacific Blue